You’ve kept donating. And now we’ve raised nearly a thousand dollars. I am speechless. Does someone want to pledge an early Saturday morning wakeup call so I can get out to Naperville in time next week? I think your money would still go to the cause if I overslept, but as a matter of principle, I would like to, you know, walk the walk.

I have so many things to plan right now it’s making me twitch. And yet I’m compelled to babble about the following:

America’s Next Top Model: Clearly Jade is some kind of emotional Rasputin, able to withstand repeated attempts to kill her gargantuan ego week after week. I am starting to admire that. Also, I hope Danielle’s new teeth don’t change her accent. Also, Sara is tall and needs to be reunited with her own kind, pre-law majors. And Furonda is skinnininninny.

I keep reading all this stuff and thinking: why do we want seventeen-year olds to publish bestselling novels anyway? Why can’t we just amuse ourselves by training dogs to say “Ri rove roo” and leave the kids alone? (I have a way longer rant against the notion that anyone younger than twenty should be published, but it’s for another time.)

Tomorrow is Chris’s birthday and I bought us tickets to see the Comedians of Comedy show tomorrow night. I think it’ll be fun, considering the last time he was at a comedy show on his birthday he had a few drinks and hit on one of the performers, and they totally wound up dating the whole next year. And then some.

THANK YOU. THANK YOU, PRETTY PEOPLE.

I am less than $100 away from the goal now, thanks to those of you who have pledged. I’ve sent out a bunch of personalized copies (five? six?) of The Amazing Mackerel Pudding Plan now–and between this and the contest, I’ve just about run out of books! So while I’m all out of the new book, I can still offer a personalized copy of I’m Not The New Me to anyone who pledges more than $75. And THANK YOU THANK YOU.

Two weeks from Saturday I’ll be doing Walk for The Whisper, a benefit for ovarian cancer research and awareness. The “awareness” part, for me, happened when my mom was diagnosed this past fall. Now that winter and her chemo are over things are looking up, and now I feel like walking. It’s simple as that. Or maybe it’s not simple, but when it comes to stuff like this, everything is a total understatement.

My fundraising page is here. My goal is $700. Please help if you can. If you can donate more than $75 I’ll throw in one of my books, personalized.

I’d heard about the tornadoes that hit Iowa City last week, but it wasn’t until yesterday that I saw photos of the damage. As soon as I saw that that some of the worst hit areas were in my old neighborhood–I lived just up the street from this sorority house–I began to look all over Flickr to see if I could find out what happened to my old place.

For three years I lived on the first floor of an old house a mile off campus. It was perched on a little bluff overlooking a quiet intersection with a brick street. It had two porches, one off each bedroom, and an old-fashioned metal roof. Right after we signed the lease, my roommate and I showed the place to her mother, who declared it a deathtrap for about fifteen different reasons, many of them stupid.

“How are you going to keep people from just climbing in your windows?” she asked. We’ll lock the windows, we told her. She wondered alound if the carpet had mold, the deadly kind. Probably not, we told her. “The bathroom is upstairs? You’re going to fall down those stairs in the middle of the night,” she said. No we won’t, we told her. She was sure the place was filled with mice or termites or radon gas. (It wasn’t.) The floorboards might warp. (So what?) The gasket seal on the refrigerator could be better (The hell?) When she’d finally run out of things to find fault with, she stepped outside with us and peered up at the beautiful old tree in the side yard.

“That tree is going to fall on the house,” she said.

But as it turned out, it fell the other way.

I’ll be at Barnes & Noble Webster Place the night of Thursday, May 25th, 7:30 pm to read from Amazing Mackerel Pudding Plan, And no, I haven’t yet figured out how I’m going to READ from a book that consists entirely of pictures and snickery captions, so it should be a hoot.

This weekend I have been up to my teeth in doing promotional stuff–stuff which of course I can’t discuss without further promoting the thing I’m promoting, even though I promised myself I wouldn’t just write about promotional stuff on this site.

So instead I will tell you about how I was on my way to this record fair on Saturday to visit Chris (who was selling records there, because he has a lot of records, and if he wanted to he could build himself a bunker out of records and sit inside it listening to more records while eating records, like that’s how many records) and see if he needed me to run and get change or a sandwich, because he doesn’t really eat records.

I passed a man on the sidewalk outside the building. He asked, “You going to the record fair?” Yes, I told him. Then he barked, “WELL, DON’T BOTHER. I BOUGHT ALL THE GOOD STUFF.”

And I rolled my eyes and I walked by and thought but I’m not buying records, you dunderdick and couldn’t help but feel a little indignant that he had to spit that little gob of hubris in my direction. Why couldn’t he keep his totally imaginary schadenfreude to himself? The only good response to a person like that is to travel twenty seconds backwards in time and tell him to shut up in advance.

I am glad it’s spring but I swear, this is the coldest time of the year for me, when the wind blows more and the building-controlled radiators run less, and the heady mix of bright sunlight and icy breeze makes me squinty and strangely exhausted.Â  I’d tell you to wake me up in June, but I have so much to do between now and then, I’d better stay awake. 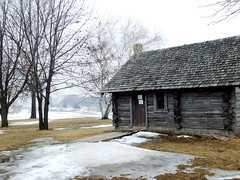 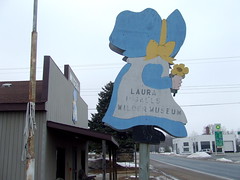 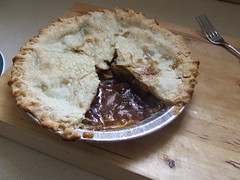 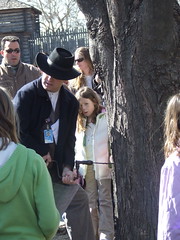